Yesterday I went to a Raspberry Jam  - the pi world is full of tasty puns - at Madlab in Manchester.  The jam is run by Ben Nuttall, a young entrepreneurial enthusiast who's also co-started a weekly email newsletter.  (It's thanks to it that I know some of the stuff below)  Here he is giving us an opening presentation on developments in the pi world. 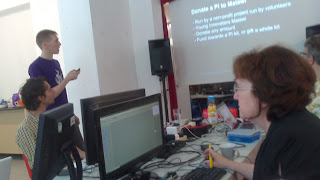 Some of what's going on is amazing.  One man, fired by a stray remark about why barcodes on ready meals don't automatically tell the microwave how to cook your meal, has hacked his microwave to do just that.  There are pi-powered web servers, a pet door triggered by a unique dog's bark, chess games and all sorts of educational projects.

Linda, in the foreground of the picture above, and I spent the rest of the day trying to make lights go on, as instructed by our little Python-scripted programs on our pis.  Her light was supposed to go on and stay on; mine was supposed to blink on and off.  After a few patient, occasionally expletive-filled hours we succeeded, with a little help from our friends, newly-acquired among the 20 or so people who preferred to spend one of England's few hot summer days indoors hunched over little bits of disobedient equipment.

I was heartened to meet a fellow-enthusiast who was an IT person by day and was making an Internet radio, as I'm hoping to do.  And his very nearly works though it only gets BBC Radio 2.  I am not sure I'll ever reach that dizziness-inducing target.

The only shock of the day, after a hearty meal in the Earth cafe round the corner from the jam, was to get home and hear that my partner in life doesn't really want an Internet radio after all.  That means I may have to come clean and admit I'm doing this for me, not for anyone else.

She'd prefer something that monitors and looks after her garden.  Something, that is, like Zoe Star, a robot in a romantic relationship with her garden being created by Rachel Rayns, artist in residence  at the Raspberry Pi Foundation.  I may have to wait another lifetime to be skilled enough for that.  Here are a couple of pictures of Zoe, from without and within. 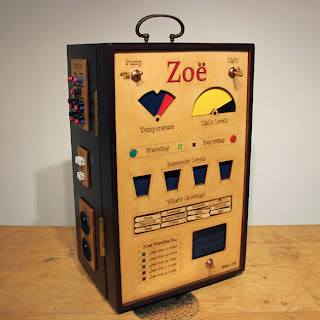 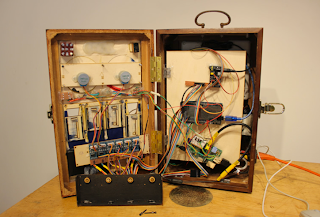